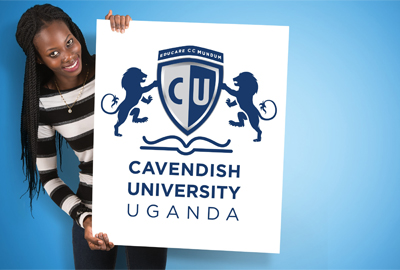 The National Council for Higher Education (NCHE) has approved Cavendish University Uganda (CUU) to conduct Open, Distance and E-learning (ODeL) following an inspection visit made by an NCHE team to the university at the end of July that thoroughly assessed the university’s preparedness for online teaching and learning. In a letter dated 7th August 2020, NCHE granted CUU permission to roll-out emergency ODeL for all its currently accredited programmes.

Cavendish University Uganda is one of the very first Universities in the country to be officially permitted to offer Online teaching and learning by the NCHE. 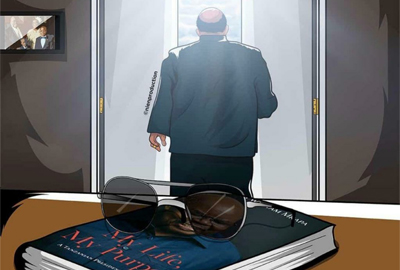 The 24th of July, 2020 shall forever be ingrained in our memory as a fateful day that came with the shocking news of the sudden demise of our University Chancellor H.E. Benjamin Mkapa. He has served as Chancellor at Cavendish University Uganda with meticulous focus, diligence and guidance since its 3rd Graduation in 2014.

H.E. Benjamin Mkapa, has been a distinguished former President of the United Republic of Tanzania who served from 1995-2005, an accomplished education advocate and a compassionate leader. He will always be remembered for his Pan African ideals, great zeal and commitment in championing the education of global citizens, particularly in Africa. 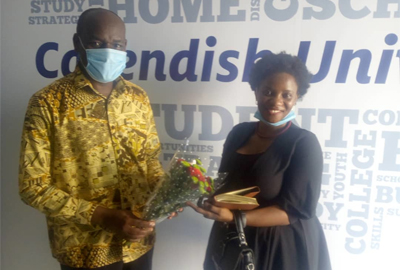 On 29th May, 2020, an Alumna of CUU, Ms. Zawedde Nabiirah, and former student guild representative paid a courtesy visit to CUU’s Vice Chancellor Prof John F. Mugisha, who also happens to be her mentor to congratulate him upon the successful and remarkable Virtual and Scientific Graduation Ceremony of CUU. Ms. Nabiirah expressed her excitement about the progress that CUU has made and appreciated Prof Mugisha for his outstanding leadership that has elevated CUU to unmatchable standards.

She then gifted him congratulatory flowers which were bought by herself and another Alumna, Ms. Ruth Akware. Both Alumni belonged to the Class of 2017 under the Bachelor of Arts in International Relations & Diplomatic Studies Programme. 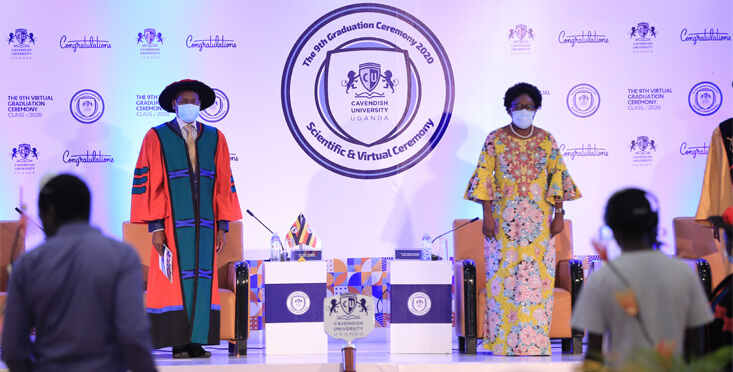 The Class of 2020 of Cavendish University Uganda (CUU) was on Thursday 28th May, uniquely celebrated in a Scientific and Virtual Graduation Ceremony. The Virtual event was also the University's 9th Graduation and first of its kind in Uganda.

The ceremony was held at the Commonwealth Speke Resort Munyonyo, under the theme; ‘Research and Innovation as tools to achieve Growth and Development.' It was virtually presided over by the Chancellor and former President of the United Republic of Tanzania; H.E. Benjamin Mkapa who explained that it is the first Graduation that the University is celebrating virtually so as to balance the need for students' employability as well as preventing the spread of the Novel Corona Virus. He emphasized that success is not automatic but a gradual achievement of specific goals over a lifetime through laying the right strategies, working hard to achieve them, being both creative and innovative.

The Vice Chancellor, Prof John F. Mugisha remarked that this year's theme was carefully selected because “Innovation” and “Excellence” are some of the highly cherished institutional core values. He further supplemented that a Virtual and Scientific Graduation speaks to Cavendish University's value of Innovation. 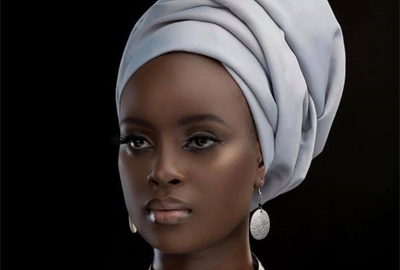 Today we celebrate one of our Alumna, Bettinah Tianah for having won the Award of East Africa's Female Fashionista of the year at the 2020 East Africa Fashion Awards.

Bettinah holds a Degree in Journalism from Cavendish University Uganda. She is an International top model, actress and TV personality. She hosts the style project show on NTV- Uganda, a program which focuses on the latest fashion trends in the world today.

East Africa Fashion Awards celebrate the deep roots in the heart of African fashion recognising and appreciating the most outstanding achievements of individuals across the great eastern Africa region, They also aim to showcase African fashion and beauty. This year's Awards were held on 28th March 2020 under the theme 'Fashion meets Culture' 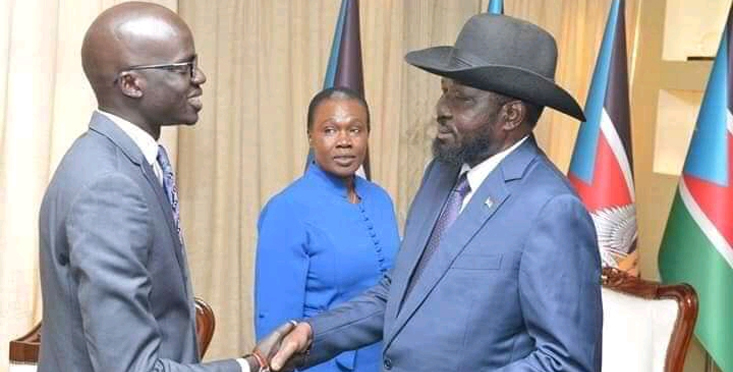 Hon. Pout Kang Chol, the recently appointed South Sudan Minister for Petroleum is confirmed to be an Alumnus of Cavendish University Uganda (CUU). He undertook a Bachelor of Laws (LLB) degree and was among the 1st Law graduates in 2013 during CUU's 3rd Graduation. Congratulations to Hon. Puot Kang Chol. 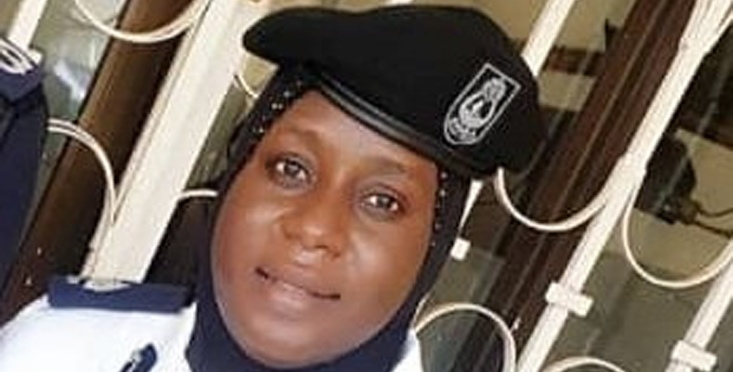 Congratulations to CUU Alumna Mam Bintou Ndongo (MBA Class of 2019) upon her promotion to Superintendent of Police and also to her appointment as the Officer in Charge of the Peace support center of the Gambian Police Force.

Prior to this promotion and appointment, she has served and still serves as a Board member for Gambia Police Force Cooperative Credit Union; Adviser to the Gambia Police female network; and Member of the United Nations Police Curriculum Development Group for mentoring, monitoring and advising course. 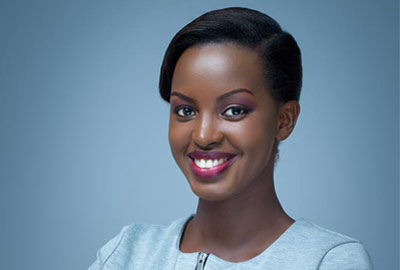 Congratulations to Flavia Tumusiime, an Alumna of Cavendish University Uganda for having received "The Rose Mary Nakabirwa Best Female News Anchor Award". This was during the 2019 Media Challenge Awards’ Ceremony which was held on 24th November, 2019 at Serena Hotel, Kampala. This award recognises a female news anchor who represents a nexus of all the elements of news presentation and was named in memory of the former meticulous news anchor, Rose Mary Nankabirwa. The award goes to a female news anchor identified by media students as the best engaging news presenter in the English language category.

The Media Challenge Awards are organised by the Media Challenge Initiative (MCI) as a means of honouring and celebrating individuals and organisations doing exceptional work in the media industry in Uganda. The awards recognise the best of student journalism and mainstream media. 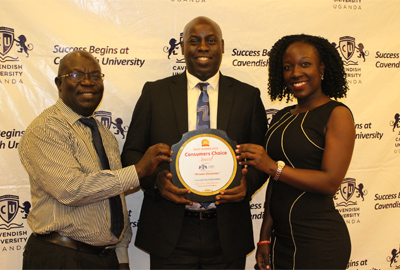 The 2019 Consumers’ Choice Awards Ceremony which was held on the evening of 29th November, at Sheraton Kampala Hotel saw Cavendish University Uganda triumph on the receipt of the 'Best Private University Gold Award'.

The Consumers’ Choice Award (CCA) was established to recognise business excellence. It is a true reflection of the marketplace as it represents the opinion of consumers and buyers across Uganda.

The award recognises brands in the Private Sector that consistently deliver a high level of service to their customers by exemplifying integrity and professionalism. 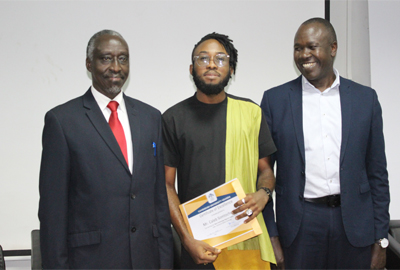 During the Cavendish University Uganda (CUU) Awards Giving Ceremony held on Wednesday 13th November, 2019, 27 students were awarded Certificates of Excellence by members of the University Advisory Council, the Vice Chancellor and other members of Senior Management, for having stood out, excelled and represented CUU on national, regional and international fronts. They were recognised for their sterling performance.

Mr. David Rusa, the Director, Special Duties- Office of the President who doubles as a member of the University Advisory Council and CUU Alumnus attested to the unique Teaching & Learning model at CUU which contributed greatly in propelling his career forward.

"I joined CUU based on a recommendation from a colleague back then when it wasn't really known. All my 3 children have since joined the same Institution because it is now a University of choice.” He acknowledged. 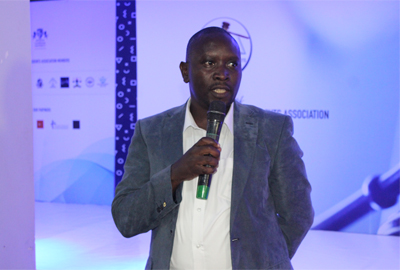 During the launch of the Uganda Law Students Association (ULSA) that was held at Cavendish University Uganda(CUU) on 23rd October, 2019, Mr. James Okurut, the Chairman of CUU Alumni Association extended words of encouragement to the CUU Law students in attendance.

He urged the young aspiring legal practitioners to be proud of CUU, and advised them to use it as a stepping stone to better themselves and shape their career path. "It is important to serve the public with dedication and passion and to always give back to the Institution that turned your dreams into a reality. Be ambassadors of this prestigious establishment and emulate some of us whose success is greatly attributed to CUU." he remarked. 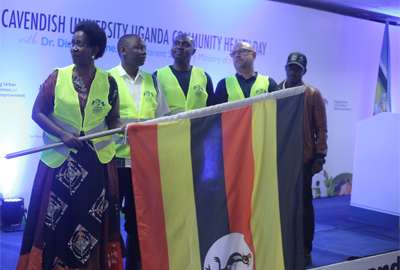 The Launch of Cavendish University Uganda (CUU) Community Health Day on 14th September, 2019 was a very memorable event that yielded remarkable Health awareness. It was piloted under the Theme," Engaging Urban Communities for Health Improvement."

"Transforming the society is at the centre of CUU’s Core Values. We are fed by the community and produce products to better the community." said the Vice Chancellor-Prof. John F. Mugisha during his opening remarks. He further acknowledged that the initiative which attracted such a huge gathering is a clear demonstration that CUU is not alone in understanding the importance of Public Health.

One of the students, Jachan Jackson, who is in his first year pursuing a Bachelor’s Degree in Environmental Health Sciences had the opportunity to showcase his innovation about vector control. He demonstrated how non-chemical methods made of foodstuffs and plastic bottles can be used to control flies and in turn prevent diseases. 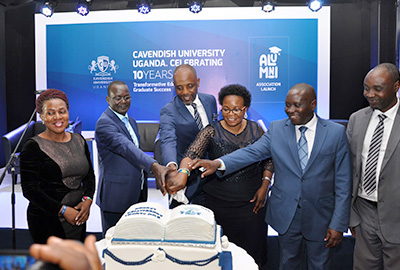 On 25th August, 2018, the CUU Alumni Association was launched. The Association is distinguished not only by its venerable alumni but also by being the 4th university Alumni Association in Uganda. The theme for the day was "Cavendish University Uganda: Ten Years of Transformative Education and Graduate Success".

Among the alumni was Gen. Jok Riak Mahol of South Sudan; Ms. Persis Namuganza, the State Minister for Lands in Uganda and Executive Director of the National Planning Authority and Katikiro of the Busoga Kingdom, Dr. Joseph Muvawala who graced the occasion as the Guest of Honour.

To assure alumni of CUU's continued progression, current students testified of their experiences and shared the various milestones they have achieved in their various chosen fields of study. The evening was then capped off with cake and dancing. 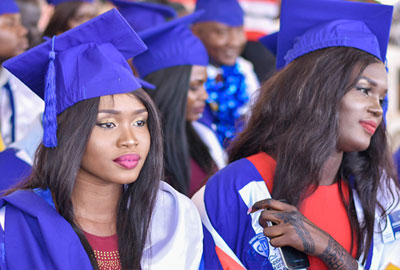 It was very well attended and some of the notable guests included; 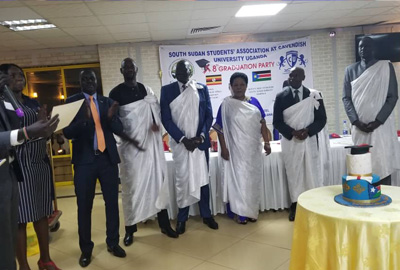 For South Sudanese, there was another graduation ceremony a day after the major one for CUU.

This graduation event was held at Hotel Africana and brought nearly all the 215 graduands from South Sudan together.

The event was organised by CUU South Sudan Students' Association in consultation with South Sudan Embassy in Uganda under auspices from the Under Secretary for Humanitarian Affairs in the Republic of South Sudan who was one of the graduands.